On your boat ride and tour of the Mississippi River in Vicksburg, with Blue Cat Guide Service, you will be on the same waters that the Natchez Indians used to hunt and trade. They paddled the mighty Mississippi in dugout canoes. Keep this in mind as you admire the strength and size of the river.

The Natchez area is the oldest center of the mound-building culture of the Natchez Indians. Mound sites abide all around the historic town of Natchez not too far South of Vicksburg Mississippi. As a matter of fact, the second-largest Indian mound in America is located 10 miles from downtown Natchez. Just off the Natchez trace parkway. This mound is called The Emerald Mound.

The Natchez Indians were a particularly important cultural group and are studied today by people from all over. They were the only mound-building sun-worshipping culture to survive long enough to be recorded by Europeans. When the French came to Natchez in the early 18th century and started a settlement they documented the Natchez Indians. You can visit Indian sites in Georgia, Alabama, Illinois, and other places. Almost all of the illustrations of the mound-building culture are the Natchez Indians. They were drawn and written about by artists and historians of the day.

Today we celebrate that culture and have a great historic site to visit. It is a grand village of the Natchez Indians and is now a national historic landmark.

On January 9th, 1861 Mississippi declared itself the second state to secede from the union partisan still argue the causes of the war but the Mississippi Ordinance of Secession clearly defined the state’s motivation. Our position is thoroughly identified with the institution of slavery. The greatest material interest of the world. After it was read, celebrations rang out on the streets below. However, not for long.

Civil War battles soon raged all over the state and the cities of Port Gibson, Jackson, and Vicksburg became key battlegrounds in what’s known as the Vicksburg campaign. By1863 Confederate forces at Vicksburg were still in control of the Lower Mississippi River. This is why President Lincoln told his advisors that Vicksburg was the key. The war can never be brought to a close until that key is in our pocket.

On April 30th General Ulysses Grant and his army of Tennessee crossed the river from Louisiana and began the invasion of Mississippi. When grant finally reached the city he ordered a series of immediate attacks, but his forces were repulsed and suffered heavy losses. Grant decided that cutting off supplies and laying siege to the city was the best hope for victory.

Day and night Union forces shelled Vicksburg. The Courthouse was a favorite target. More for its symbolic rather than strategic value. Most of the key battlegrounds lay in what’s now the Vicksburg National Military Park. The park commemorates the siege and defense of Vicksburg. Southern troops fought bravely but their efforts could not replenish dwindling supplies of food and water. After 47 days, with Vicksburg defenders facing starvation, Confederate General John C Pemberton surrendered to Ulysses Grant under an oak tree. The oak was later cut down to make souvenirs.

The Confederates marched out on July 4th, 1863 just one day after Robert E. Lee’s defeat at Gettysburg. In a letter to his wife, a Confederate soldier wrote news reached here that Vicksburg has gone up the spout. If it has we had just as well quit and give up the Confederacy. Indeed the entire Mississippi River from Cairo Illinois to the Gulf of Mexico was now under Union control. The war dragged on for another 20 months but the federal victories at Gettysburg and Vicksburg marked the turning point of this bloody conflict.

The defeat of the Confederacy was a crushing blow to the South economically, culturally, and psychologically. Following the July 4th defeat Vicksburg did not reinstate Independence Day celebrations for more than 80 years, not until 1945. Nevertheless, the south continues to take pride in its military history and to this day contributes a disproportionate number of soldiers to wars fought by the United States. Source Wikipedia

The Evolution of the Barge

Riverboats first appear in history around 3500 BC, plying the waters of the Tigris and Euphrates. The evolution of the modern barges can be traced back to the mid-1700s in Great Britain. During this time there was a great many narrow barges. When the railroad got up and running it would take much of the cargo that the narrowboats carried. It was still viable for the narrow barges to take bulky and heavy cargo and so the barge survived this time.

The locks in Great Britain were very narrow. This allowed the narrowboats to continue to operate for many years. Finally the locks were doubled in size to a width of fourteen feet. The term barge was used for these larger vessels. The people who move barges are known as lightermen.

During times before the industrial revolution, especially in underdeveloped areas, the barges that were used were powered by long poles and were known as pole boats. The long poles were maned by “walkers”. Walkers used the long poles and muscle power to control drift down the Mississippi River and even poled upriver against the current.

Water travel made trade possible in the new America as well as aided in the growth of civilizations along navigable waterways. River transport was one of the first modes of travel and commerce used in America. One of the first documented large transports in America was a cargo load consisting of bear and deer hides down the Mississippi in 1705.

Next came the “flatboats” or “keelboats,”. Flat-bottomed floaters could be constructed by strapping planks or poles together. They were little more than box-shaped floating decks that needed a “push.” Many were as large as 10’ X 80’ and carried substantial loads. If the cargo was raw materials like coal or timber, the boats could be open to the elements. If the commodity needed to be kept dry, like grain or furs, then a top was erected. Traveling downstream, even when heavily loaded, was a fairly easy chore. Flowing with the current polling and rowing when necessary to keep the barge on track. Once at the destination, many boats were dismantled, and the wood was sold. This was done because it was too difficult to poll or row back upstream.

The “push” really became known as a “tow” and the term “towboat” came to mean the powerboat that pushed the “tow” of barges along the river. A load of barges being pushed then came to be known today as the “tow.”

Modern towboats can be as long as 200′ in length, depending on the rivers they navigate and can be as wide as 50′ with flat bottoms. Power from their diesel engines ranges from 600 to over 10,000 horsepower.

River barges also have flat bottoms and are usually 200′ long and 35′ wide. Based on data supplied by the American Waterway Operators Association, the following are basic types of barges currently in use on U.S. rivers:

There are also specially created barges for special tasks. For example, NASA uses a special barge for transporting the massive space shuttle fuel tank. From its manufacturer in Mississippi to the launch site. 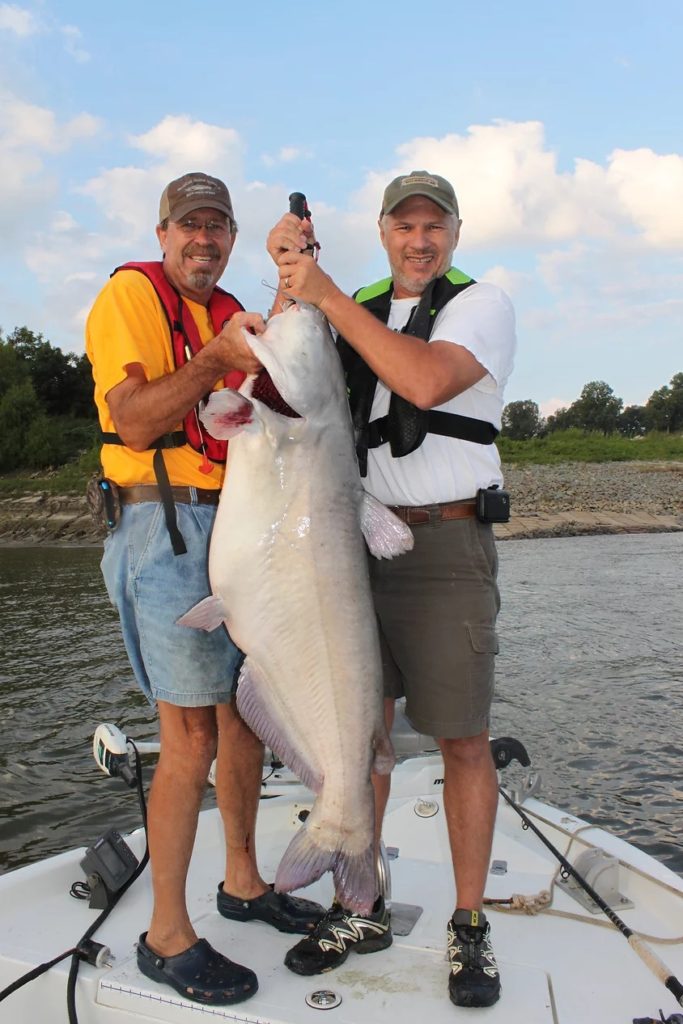